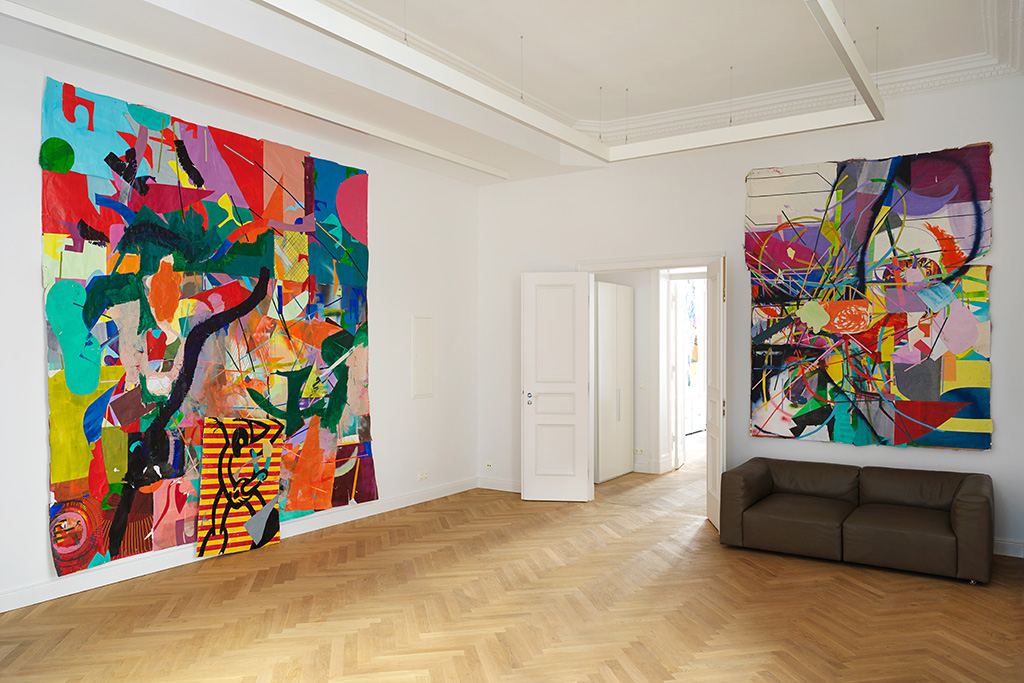 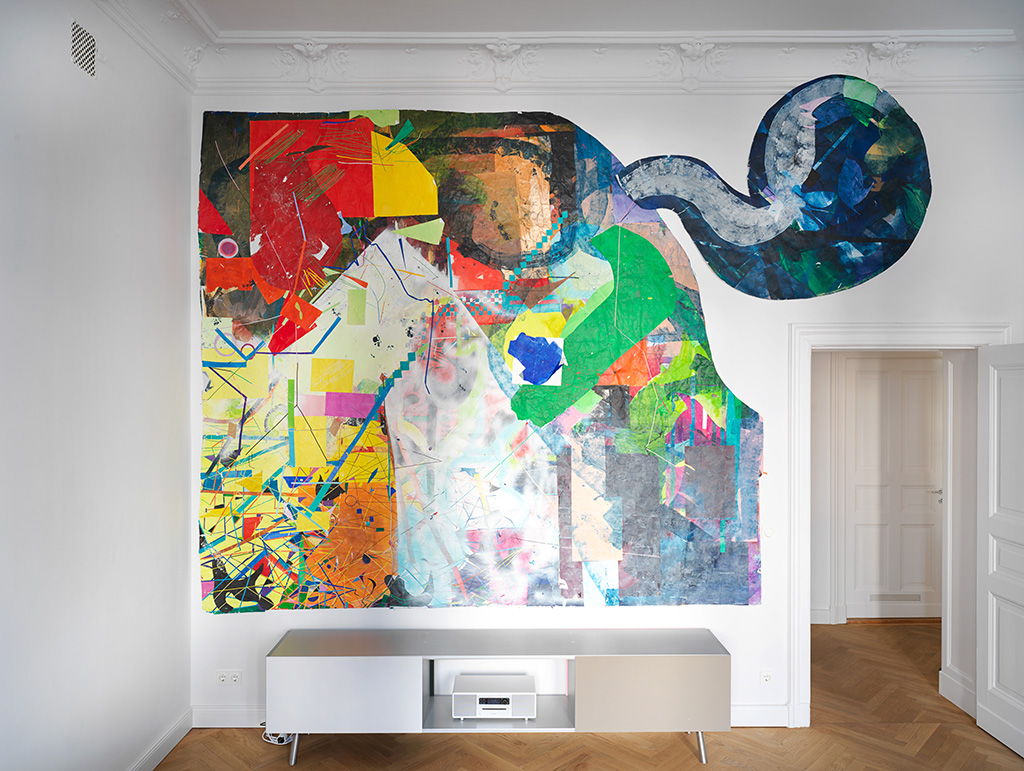 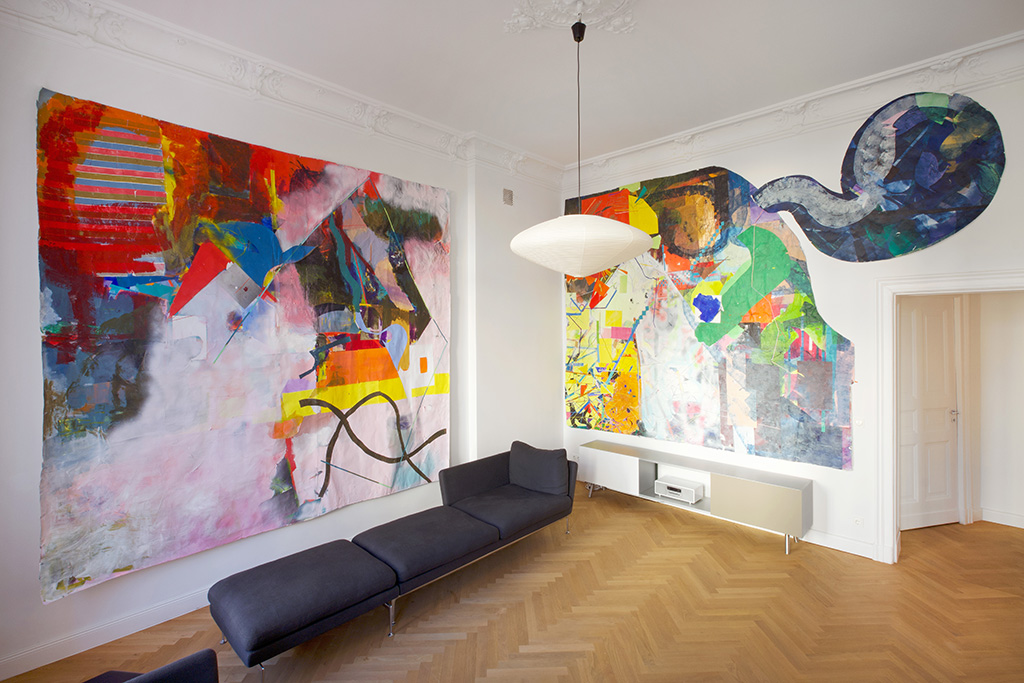 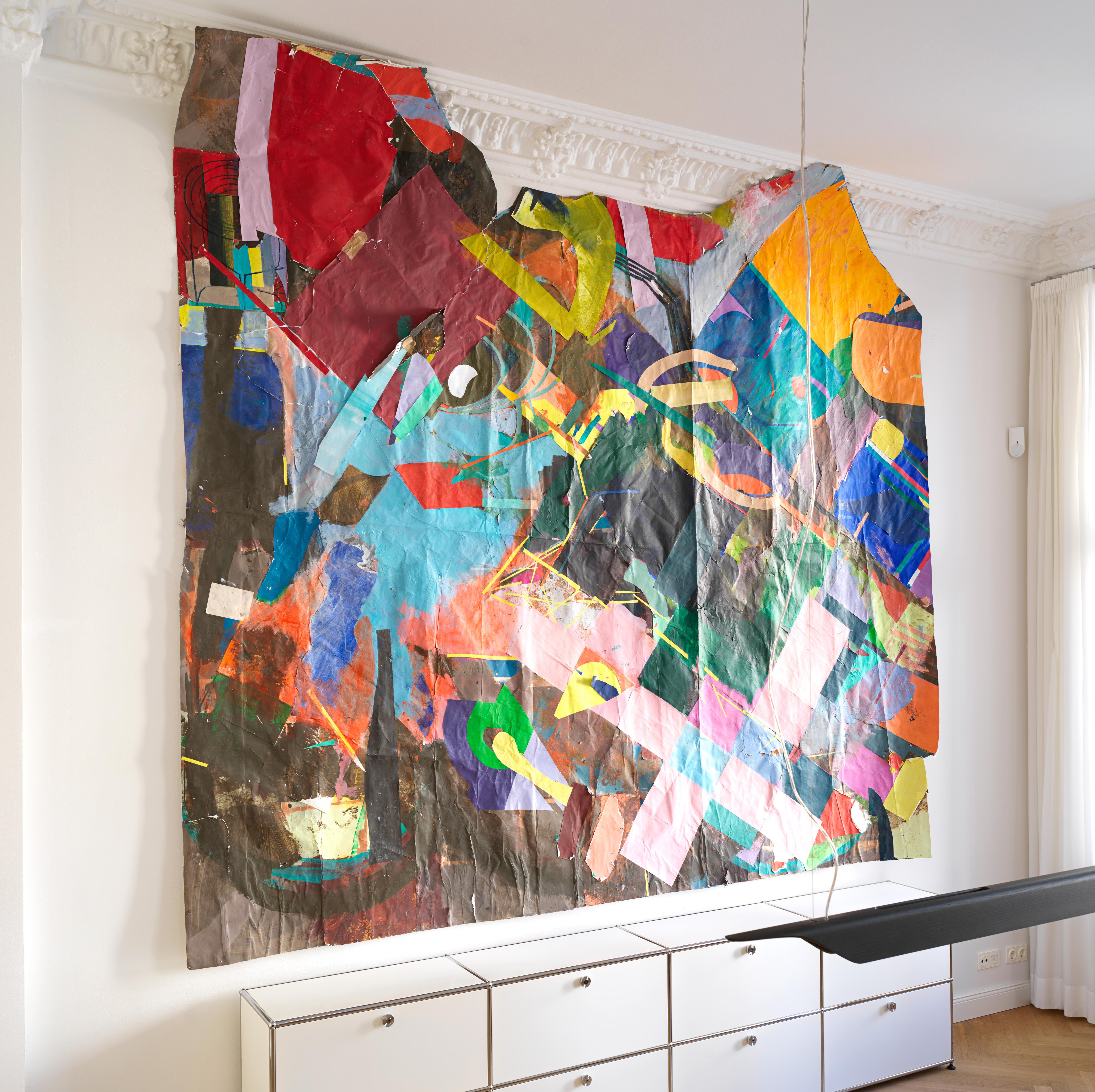 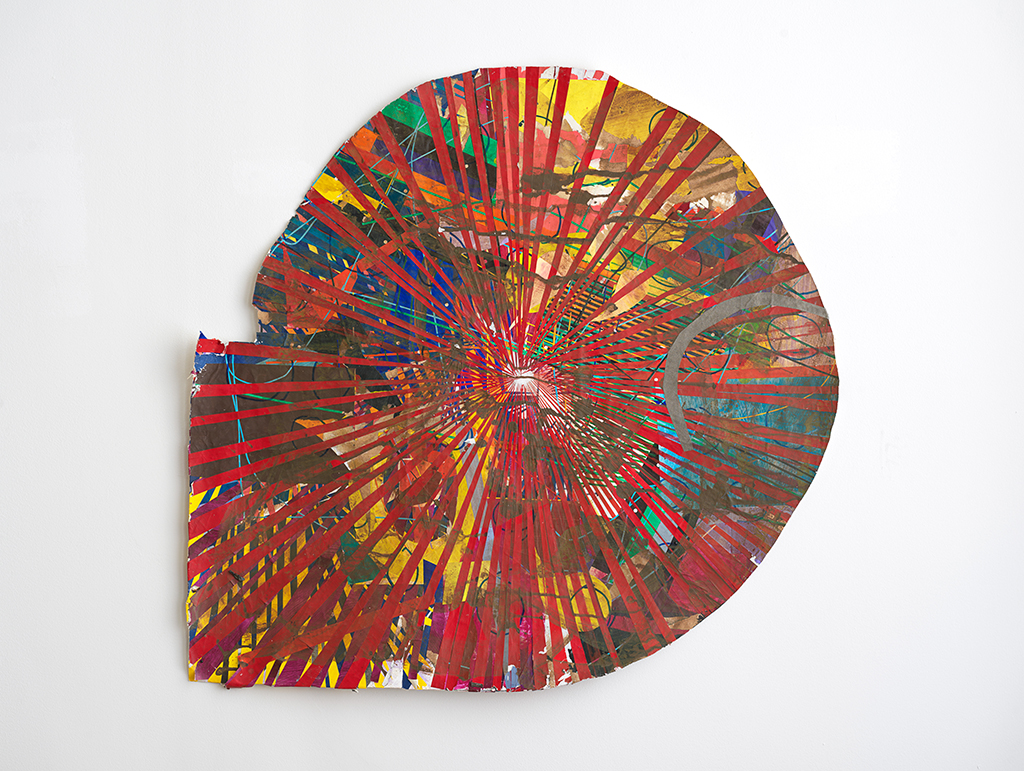 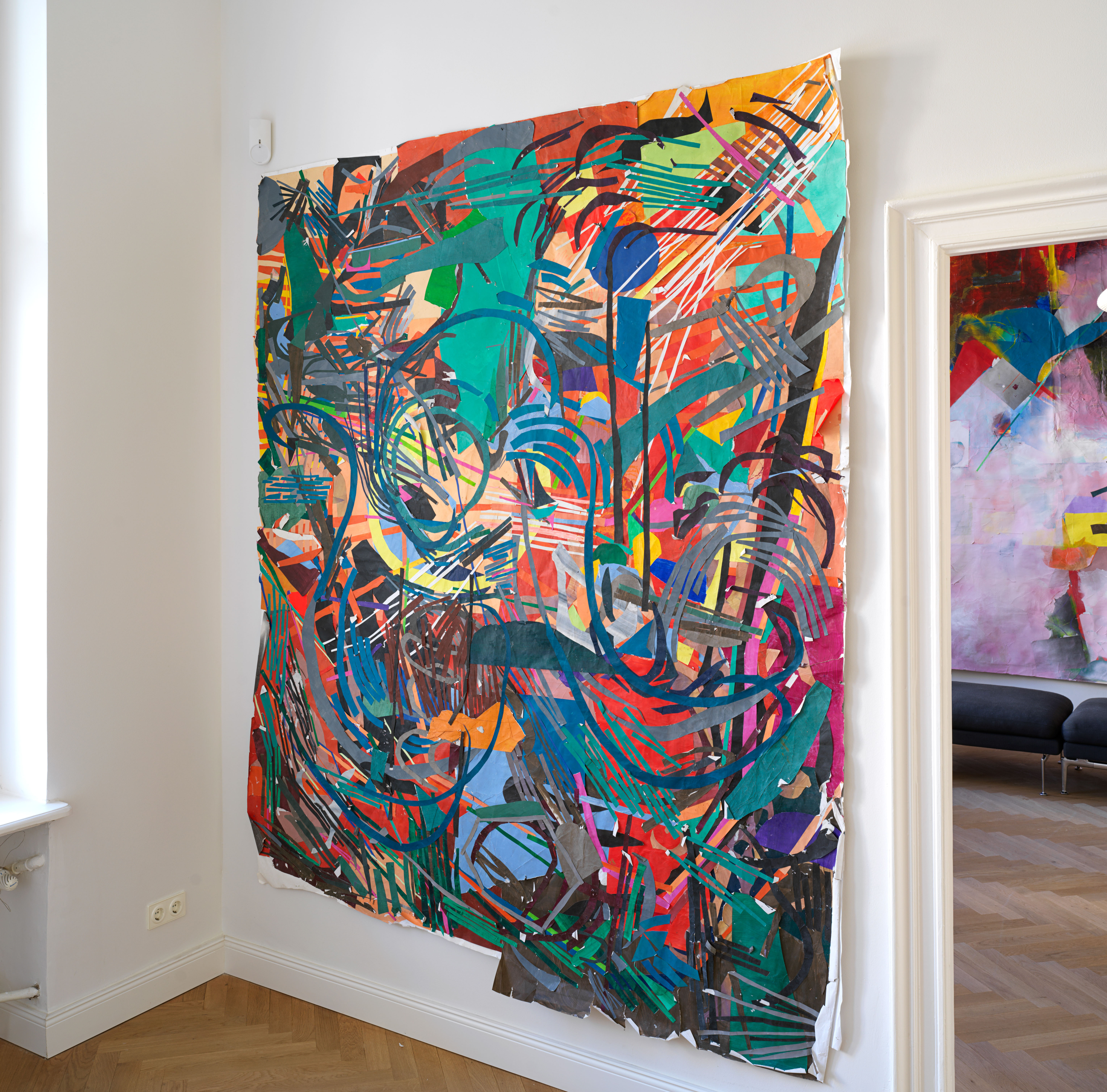 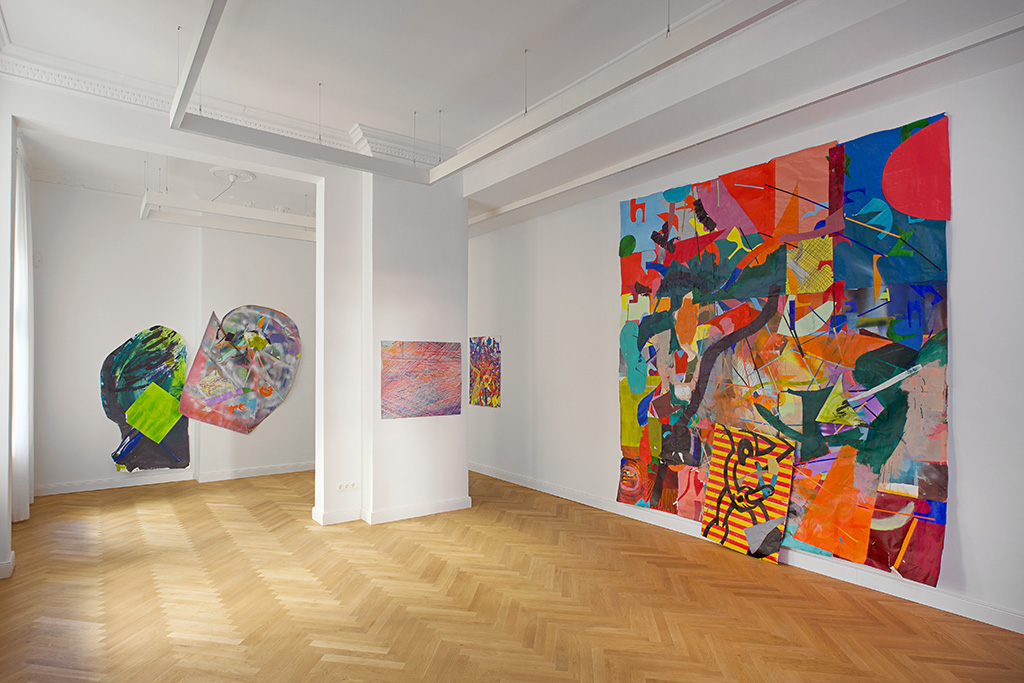 Confronted with Kirsi Mikkola’s Oeuvre one is immediately right in the midst of it, and torn back and forth. There is no beginning – and no end.

The works of the Finnish artist are difficult to assign a category to, their brittle nature evades a conventional picture format. The large works, some of which grow beyond the studio ceiling, have angles and edges and every now and again an unruly element protrudes outwards. Terms like ‘painting’ or ‘collage’ are refused by the artist, and ultimately by the pictures themselves, as soon as you allow yourself to engage more closely with them. Anything is possible: the painterly gesture that is brought to life again and again in splintered form. The collage that does not allow itself to be reduced to that technique – applied far too meticulously and in far too many layers. The constructional moment that suddenly dissolves in precision to dive headlong into a chaos of shapes and colours. Brushstrokes become surfaces, cut-out shapes become brushstrokes. A world of sensuality and serious engagement unfolds and all of a sudden falls apart, sometimes through a humorous gesture in the form of a pinned-on adaptation.

Follow a path into the radical image worlds, it feels like riding a wild animal – the work as the creature bucking and shaking itself, tearing away without restrain into unimagined depths lying behind layers, shapes and lines. Then it all finally comes to a stop in an empty clearing. The painting falls apart, comes back together again, revealing colour plays whose intensity and radiance amaze. In the next moment, you sink into a dull lilac-nuanced grey or are hypnotized by an algae-like green tone. Take a deep breath, enjoy the freedom, keep on watching. Mikkola often speaks of music compositions when asked about how she works, wanting to get to the bottom of her visual language. In comparison to the works of the past years, one now feels a more easy generosity, a dissolution of the otherwise so densely woven structure of the work – more air, less unrest.

Mikkola’s works, when she has to let them go to be tamed by anonymous rooms, can seldom be seen in an exhibition context, because the artist fears for their liveliness. This presentation in the private space of the Miettinen Collection is an experiment that attempts, if possible, not to tame these wild beings and aims not to force Kirsi Mikkola’s uninhibited visual language – which can on another level be compared to musical compositions – too much into a corset. The uncomfortable revolt, the desire not to forget idealistic ways of thinking, to stimulate something are matters that are close to the artist’s heart. Something she often realizes both radically and unsparingly, sometimes even painfully for her and the onlooker. In all that fierce primal force there is also always a certain fickleness, a vulnerable recklessness. After all, the powerful works are relatively thin, no frame supports them, there is no skeleton – they only have themselves, the matter of which they consist, layer for layer on paper and colour pigments.

The exhibition brings together generously sized and small formats, all of which were created in the year 2018 and are being presented to the public for the first time.

Kirsi Mikkola, born in Helsinki, lives and works in Berlin. She has been teaching at the Academy of Fine Arts in Vienna since 2015.